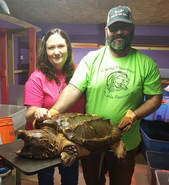 Christy and Luke have always had a passion for animals.  After marrying in 2006, they took in two three-legged turtles a neighbor had rescued.  Not knowing much about turtles, the couple took to the internet to research proper care. This led them to an online discussion board called the Turtle Forum (www.turtleforum.com). They didn't know it at the time, but the information they would learn on this website, the lifelong friendships that would form, and the mentors that were found there would all go on to form the basis of our rescue operation.  Even today, Christy and Luke consult with and rely on the information and guidance from their friends whom they originally met on this internet forum.

In 2010, a friend they'd met on the Turtle Forum was looking for a permanent home for a severely deformed redfoot tortoise.  The Milbournes took one look and knew they could help that poor animal.  That tortoise, Booboo, came to live with them and quickly became not only a much-loved family pet, but also an internet star.  Christy and Luke learned so much from this little misshapen tortoise, and they used this knowledge to help other pet owners understand how important proper husbandry and diet are for turtles and tortoises.  Sadly, Booboo passed away at the end of 2012.  But his life, and eventual death, would be the catalyst for the formation of the Central MS Turtle Rescue.  Booboo's legacy carries on in the lives of every single turtle or tortoise that ends up here for care. (You can read more about Booboo's story here.)

Booboo's life, and the joy the Milbournes received by giving turtles a helping hand whenever they'd see them injured, quickly turned into passion to help all the injured or sick turtles in Mississippi. The Milbournes received an administrative wildlife rehabilitation permit from the MS Department of Wildlife in 2013, and set out to make this "hobby" a nonprofit organization so that they could help as many turtles as possible around the state.  In 2017, they saw their dream realized, when they were approved by the State of Mississippi and the Internal Revenue Service as a 501(c)(3) nonprofit charitable organization, and officially became the Central MS Turtle Rescue.

Christy and Luke live in Florence, Mississippi (Christy's hometown) with their ever-changing number of turtle and tortoise "patients", 3 dogs, 2 snakes, 1 crested gecko, 1 bearded dragon, and 1 75+ pound sulcata tortoise.  Luke and Christy both also work full time for the state government, but hope to retire one day and do nothing but help turtles and tortoises in need. 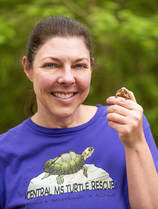 Notable is her involvement as a past board member with 3 animal welfare organizations (both national and state level), her experience as a founding member of two animal rescue groups (GA and NE), and her longtime volunteer work with animals of various species.

Wendy and her husband, Jim (also a CMTR volunteer) reside in Madison, MS.  They are the proud parents of 3 rescue dogs:  Booker, Lovey and Roux.  The foster numbers continually change, but the Schroeders foster an average of 15 turtles at a time for CMTR. 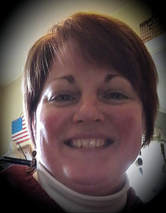 Pam Gigac (Secretary) Pam is a long time turtle keeper known for rehabbing and providing sanctuary to turtles that have been given improper care from prior owners. She is a mother of 4 daughters, married to a VERY understanding man. She has two degrees from Penn State University, but has chosen to leave the official workforce to run a child daycare to help local families raise their children at affordable prices.  Pam is also an artist and does custom paintings as well as designs nearly all of our t-shirts and other products used for fundraising. In her spare time she also helps her husband run his general contracting business.

Pam is very passionate about turtles of all kinds. Her turtles are primarily kept outside in very large, naturalized, enclosures. Her goal is to allow turtles to live their lives as naturally as she can provide, while keeping them safe and healthy. 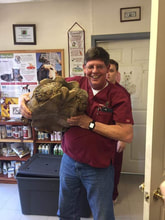 Dr. Rick Kirby, DVM (Member at Large) Even though Dr. Kirby was born in Lincoln, Nebraska, he feels like a native of Brandon, Mississippi. He made his way here through Nashville, Tennessee in the 8th grade where the love of all things Bulldog started. After graduating from Brandon High School, he enlisted in the U.S. Army as an Animal Care Specialist and trained at Walter Reed in Washington D.C. After traveling much of the world while stationed in Okinawa, Japan, he made his way home to Brandon as soon as he was honorably discharged.

Dr. Kirby worked his way through Hinds Community College and was accepted into the Veterinary Program at Mississippi State University. While at MSU he announced the arrival of Cody Kirby. During his senior year, one of his many externships was at Marine World in Biloxi, Mississippi, where he worked with the dolphins. He also did externships in reptile and exotics medicine, where he developed his interests in herpetology and other unusual pets. During his graduation speech as president of the class, he announced he was expecting his second son, Clint.

After graduation, he started work around the Brandon area until starting his own Hometown Veterinary Services in an ambulance where he made house calls. This led him to meet one of his most well-known clients, Willie Morris. Their relationship grew as Willie acquired more cats, and Dr. Kirby was even honored with being mentioned in his book My Cat Skip Magee. When filming started in the Jackson area for the movie My Dog Skip, there was not a question as to who would be the vet on the set.
​
Work at the Animal Emergency Clinic was a ten-year employment that brought many friends and loads of funny stories still told. The building on 471 was a lifelong dream that started in June of 1997. There his loyal client base began to grow into what it is today. Dr. Kirby’s home family increased as well. Katie and Cameron brought their own joy to clients who remember both of them rolling around the clinic in their strollers developing their own love of the clinic family. Now married to Pamela, he has added a stepdaughter Katie Mae. The family continues to grow, but only in animal form.
​
The years have brought many accolades, but none as special as being voted Best Vet by his clients in the Best of the Best for Rankin County last year. He continues to be humbled by the support he is shown by the community as he starts a new chapter with Hometown Veterinary Hospital in its new location with his new partner, Dr. Daniel Plunkett. 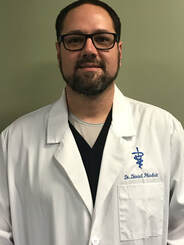 Dr. Daniel Plunkett, DVM (Member at Large) Dr. Daniel Plunkett grew up on a cotton farm in rural Holmes County, Mississippi, where he developed a love of farm life. He spent most of his childhood helping his dad pick cotton. In the summer of 1989, he and his family moved to Jackson, due to both of his parents’ acceptance into the UMMC School of Medicine. His father, Dr. Kent Plunkett, is a nephrologist in Greenwood, and his mother, Dr. Karen Plunkett, is a neurologist in Grenada, Mississippi.

After graduating high school, Dr. Plunkett worked as a dispatcher for his local sheriff’s department. He later worked for the Mississippi Department of Corrections as a field officer. Dr. Plunkett graduated from the Mississippi Delta CC Law Enforcement Training Academy in April of 2002. After spending four years in law enforcement, he decided to make a career change and get his bachelor’s degree.

Dr. Plunkett received his Bachelor of Science in Biology from Delta State University in 2008, graduating Magna Cum Laude. He graduated with his DVM degree from the College of Veterinary Medicine at Mississippi State in 2014. After graduation, Dr. Plunkett worked as a full-time veterinarian in the Flowood area and part-time in the Pelahatchie area until 2016. In January 2016, he began working as an associate veterinarian at Hometown Veterinary Services with Dr. Rick Kirby. In the fall of 2016, he and Dr. Kirby started their journey of forming a partnership. That partnership led to building what is now Hometown Veterinary Hospital, the largest privately owned practice in Mississippi.
​
In his spare time, Dr. Plunkett enjoys fishing, hunting, riding his Harley, spending time with his family and his Hungarian Vizsla “Gemma.” Dr. Plunkett looks forward to working with the patients and clients of Hometown Veterinary Hospital. 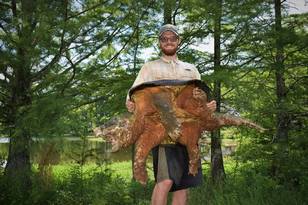 Luke Pearson, (Member at Large) Luke Pearson graduated from the University of Central Arkansas (UCA) with a Bachelor’s degree in Environmental Science. He originally began in academia assisting with multiple graduate student projects focusing on fish research, including American eel (Anguilla rostrata) migration, optimal spawning and rearing habitats for larval fish, and even the effect of natural gas drilling on stream fish communities in the Ozark Mountains. However, after a combined fish and turtle survey project, turtles captured his interest and he’s been catching, handling, and researching them ever since! Luke continued his education and graduated from UCA with a Master’s degree in Biology, where he studied hormone concentrations in the Ouachita map turtle (Graptemys ouachitensis). Afterwards, he moved to southern Illinois as a field technician to track alligator snapping turtles (Macrochelys temminckii) with radio-telemetry. These turtles were head-started and re-introduced into the wild to determine if breeding populations would survive.
​
Currently, Luke is a PhD graduate student at the University of Southern Mississippi focusing on turtle research and conservation, as well as part of the US Fish and Wildlife Alligator Snapping Turtle Species Status Assessment Team. He conducts state-wide surveys for alligator snapping turtles to assess if this species needs federal protection under the Endangered Species Act. Luke also has his own reptilian friends: Donatello the Eastern River Cooter, Zoro the Pearl River Map Turtle, and Zara the Brazilian Rainbow Boa.
Proudly powered by Weebly