Q: Is it called a turtle, a tortoise, or a terrapin?

A: What a turtle is called and what a turtle actually is, are two very different things. Colloquially, the answer varies depending on where you live. Generally in the United States, a TURTLE is a shelled reptile that lives most (or part) of the time in water. A TORTOISE is a shelled reptile that lives exclusively on land and has elephant-like feet. And the term TERRAPIN is usually reserved for one specific species of turtle - the Diamondback Terrapin, a semi-aquatic turtle that lives in brackish waters. Some other countries refer to any turtle in the ocean as turtle, any turtle in freshwater as a terrapin, and any turtle on land as a tortoise. So, these terms can be regionally specific. For the purpose of this answer, and to reduce confusion, we'll stick to turtles of the United States.

​Scientifically/taxonomically, ALL shelled reptiles are TURTLES or chelonians - belonging to the Order Testudines (or Chelonii).  In other words, if it's a reptile with a shell, it's a TURTLE.

In America, we generally refer to any fully-aquatic shelled reptile as a TURTLE.  TORTOISE refers to fully-terrestrial (land-only) turtles, or only those members of the Testudinidae Family.  TERRAPIN refers to semi-aquatic turtles that live in brackish water.

Below you'll see some examples of how we classify turtles, tortoises, and terrapins here in Mississippi.  (And even here, these terms can be relative based on region.  I've heard some folks refer to box turtles as "tomata eatin terrapins".)
Q: How can I tell if a turtle a male or a female?

A: It depends on the type and age of the turtle.  Turtles usually don't develop sexually distinctive characteristics until they grow to 4 or 5" long in shell length (called Straight Carapace Length, or SCL).  For most turtles, reaching that size takes several years.  At birth, most turtles look female until they grow to that 4-5" SCL mark.

A: We'll address each individually ... 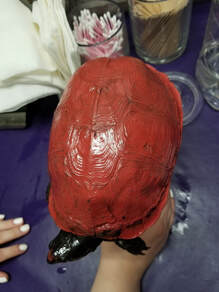 Q: Does it harm a turtle to paint its shell?

A: YES!
A turtle's coloration is designed to give the turtle the best camouflage possible so that he blends in, and predators don't easily see him.  How well do you think he'll hide from a hungry predator looking like this?

​Additionally, a turtle's shell is a living part of its body. The toxic chemicals used in markers or paint can be absorbed through the shell into the turtle's bloodstream.  This can make a turtle sick, or it could even be deadly.  Please, never mark on a turtle in any way.  Besides, they're beautiful just the way they are.  They don't need any extra adornment.

And perhaps most important is that if you paint a turtle, you're covering up much of the surface area of that turtle.  Turtles MUST absorb UVB light from the sun which their bodies convert to Vitamin D3. Without Vitamin D3, they cannot absorb calcium, which can lead to soft or brittle bones - a condition called Metabolic Bone Disease, which can be fatal.  While much of the UVB rays are absorbed through a turtle's skin, there's not much skin surface area on a box turtle or tortoise that's regularly exposed to sunlight, and it is believed that they likely absorb UVB rays through their shell as well as their skin. Covering the surface of the shell could greatly reduce the amount of UVB the turtle can absorb.

Photo courtesy of Kawartha Turtle Trauma Centre
﻿Q: Can a turtle come out of his shell?﻿

A: Nope, nope and nope!  No matter how many cartoons portray this as possible, the only way in real life you'll see a turtle without a shell is if it's dead.  A turtle's shell is really an extension of his rib cage.  The bones of his ribs grow around the outside of the organs.  These rib bones then fuse together, forming a solid shell that surrounds the turtle.  On top of the bone is a thin layer of keratin (much like the keratin on your own fingernails.)  The keratin layer is the part we see in pretty camouflage patterns. In the diagram to the right, you can see how the ribs form the shell, and are connected to the head, neck, and tail. 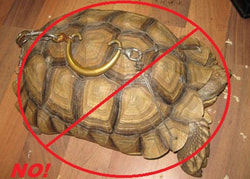 Photo credit: unknown
﻿Q: Does a turtle have feeling in its shell?

A: Yes a turtle's shell does have feeling!

If you scratch a turtle, he will feel it just as if you were scratching his skin. He can also feel pain through his shell. We've sadly seen many cases where humans have drilled holes in turtles' shells.  They do this for many (bad) reasons - to hook a chain to them to tether them to a fence or leash, to carry them, etc.  This is EXTREMELY painful for the turtle and should never, ever, be done.
﻿Q: Can I pick a turtle up by its tail to move it?﻿

​A: Only if you want to paralyze it or kill it

NEVER  pick up a turtle by its tail.  Since the tail is attached to the spine, doing so could sever its spinal cord.  If you need to move a turtle but are afraid to grab it, simply scoot it along with your foot or a stick.  It's much better for a turtle to have a few scratches than a severed spine. 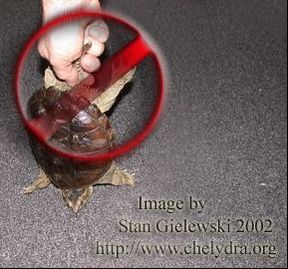 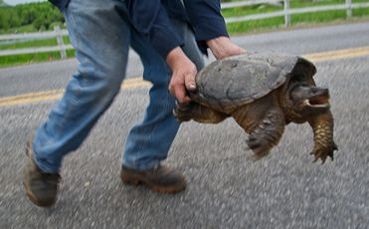 I saw a big 'ole loggerhead snapping turtle on a log!

Sorry...but, actually you didn't.  Most people assume that the freshwater turtles they see in ponds and lakes around Mississippi are all called "snappers" or "loggerheads".  There is actually no such thing as a loggerhead snapping turtle.  And in fact, most of the turtles you're seeing are probably just your average slider or cooter.


Snapping turtles don't regularly bask like sliders, cooters, map turtles, etc.  They generally stay in the water, coming out only to mate, lay eggs, or look for food.  They're bottom-walkers, which means they usually stay at the bottom of their pond.  Common snappers surface occasionally to breathe.  Alligator snappers can go hours without the need to surface for a breath.  So, chances are, if you see a turtle basking on a log, it's not likely to be a snapper.


The turtles below are true snapping turtles (the only two species native to Mississippi)
There are two types of turtles referred to as "loggerheads", but neither are snappers.  One is a musk turtle (Sternotherus minor), and the other is a sea turtle (Caretta caretta).
Q: If I buy a baby turtle and keep it in a small tank, will it grow only to the size of its tank?

A: No. This is a common myth about many animals, including fish.  Many people think they will only grow to the size of their habitat, but that couldn't be further from the truth.  A turtle will keep on growing, no matter how its restricted.  And most species of turtles get very large! The photo below on the left is Scooter.  Scooter was bought as a hatchling and kept for years in a pizza box, only being fed foods like lettuce and celery.  Because of the poor diet and environment, his bones and shell formed improperly, and now he's mostly flat.  The turtle on the right is a snapper that got caught in a milk ring when it was small.  It couldn't get out of the ring, so his body grew around it.
In the United States, it is illegal for shops, breeders, or retailers to sell turtles under 4" in shell length as pets; however, many sellers get around this by listing them as "for scientific or educational purposes".  In major tourist cities, you'll see baby turtles in almost every souvenir shop. Most people have no idea what they're getting into when they buy one of these cute babies, only later realizing that this cute baby turtle has gotten huge, so now what do they do with it?  (This is how many turtles end up in rescue facilities like ours.)

​These shops are also infamous for selling the baby turtles with "death bowls" - small plastic bowls, often with a cute palm tree in the middle - and tell the customer the turtle will never need anything else.  Impulse buys are never smart, especially when a living, breathing animal is involved.  The general rule of thumb for aquatic turtles is 10 gallons of water for every inch of shell length.  For most species, this requires a minimum 55 gallon tank or larger for one adult turtle.  The photo on the left is a typical turtle-and-death bowl purchase from a souvenir shop. Those babies should be in at least a 10 gallon tank.  The photo on the right shows the adult version of that cute baby turtle, and demonstrates why these death bowls are never a suitable habitat.  That turtle should be in a 60-75 gallon tank.
If you think you're ready to take on the responsibility of keeping a turtle as a pet, please do TONS of research first.  This isn't the type of pet you can buy or adopt, and then figure it out as you go.  Turtles have very specific needs, and can be expensive to get setup properly.  Their vet expenses are also much more expensive than the expenses for a cat or a dog.  And yes, at some point, you WILL need a vet.  Turtles get injured and they get sick, just like any other animal.  "If you can't afford the vet, then don't get the pet".  And if you can't afford proper housing and supplies either...well then a turtle may not be the best pet for you or your family.  Below are a couple of photos of appropriate aquatic turtle habitats.

The photo on the left is by an unknown Reddit user, and is one of the best indoor tank setups we've ever seen.  The turtles are provided adequate, deep swimming space, a beautiful land area, appropriate heat lights, and required UVB lighting the turtles need to metabolize their food.  Of course, outside in a pond is the best and most natural way to house a turtle.  The photo on the right is one of our own outdoor ponds. (Any turtle kept outdoors must be properly protected from predators.  Notice our ponds have locking screen lid covers.)
Proudly powered by Weebly