Spread the word about us!

We can't help if people don't know we exist.

Too many times have we heard the words "Oh, I wish I'd known about your organization sooner!"

Too many times have turtles not survived their injuries, because it wasn't known that we were here to help.

Too many turtles have gone un-helped when rescue was only a phone call away.

We started this organization to help the sick, the injured, the abused, and the neglected turtles of Mississippi.  You can help us do that by spreading the word about our organization.
​

Share our Facebook page
The fastest way to spread the word about our organization is via Facebook.  It appears everyone is on social media these days.  We use it to post and update on the things we're doing and the turtles we're saving.  If you haven't checked us out on Facebook yet, hit that "like" button above and then share it so all your friends can learn about us too!
Share our flyer
Clicking on the image below will bring up a printable .pdf file.  Take one to your vet's office, hang one at your local animal shelter, and share one with anyone you think may one day come across a turtle in need.

You can help clear up some common misconceptions regarding turtle behavior that often lands turtles in danger from angry, misguided humans.
Sharing what you know about turtles can help ease tensions between man and beast.

Many people don't realize how beneficial turtles are to the ecosystem

Many people believe myths and old wives tales about turtles, and wrongly assume they are dangerous or destructive.

Many people don't realize there are things they can do to help turtles.
Myth vs. Fact
Myth: Snapping turtles will attack you.
Fact: Snapping turtles only snap when they're being threatened. They're not after you and they don't have a taste for human flesh. They simply want to be left alone. So go ahead and fish in that pond, let your kids play in that lake...any turtles that find themselves in your way are just going to make a beeline in the other direction. They have no desire to attack you unless you provoke them.

Myth: If a turtle bites you, it won't let go until it thunders.
Fact: If a turtle bites you, it could care less about thunder. The reason they don't immediately let go is because they instinctively know that in doing so, they would be freeing the object that threatened them in the first place, and that object (your finger or hand) may then do him harm. To get a turtle to let go, try either pouring water over the turtle's face, or submerge the turtle in water.

Myth: Turtles will eat all the fish in a pond.
Fact: Turtles will eat all the sick, slow, diseased, or dying fish in a pond.  If you think about it, fish swim much faster than turtles.  In most cases, a turtle isn't going to be able to catch and eat a healthy fish. It's a much easier meal for him if he targets the old, diseased, or feeble fish (the ones you don't want in your pond anyway.) Turtles are actually quite beneficial to ponds - they keep disease away and help maintain a clean pond.

Myth: If you relocate or even kill all the turtles in your pond, you'll be rid of turtles.
Fact: For every turtle you rid of your pond, there is another one waiting to take its place. The fact is that we're in a state where turtles are numerous. We have optimal temperatures and seasons here for over 30 species of turtle.  Unless you build a 6-foot concrete fence that is buried a foot underground and is surrounded over top with electrical wire, you're never going to have a pond in Mississippi without turtles. And the fact still remains that there's no reason to want them gone from a pond anyway.  They are beneficial and harm no one.

What if...
​
What if  you see a turtle on the road?
If you see a turtle on the road, he is unharmed, and you can safely stop to help him, always move him as far off the roadway as possible in the direction he was heading.  The only exception to this is if the road is a major thoroughfare, such as an interstate or other large, divided highway.  If the turtle you find is in one of those roads, take him back the way he came.  (Please...never move a turtle more than a tenth of a mile from where you found it. Many turtles know where their home is. If you move one away from his home, he'll just try for the rest of his life to get back to it.  In almost every instance, there is no "safer" place for that turtle than in the area where you found him.)

What if you find a turtle that's hurt?
If you find an injured turtle, collect the turtle gently (stay away from the mouth), put the turtle in a box tall enough he can't escape from, cover him with a towel, and get him to a rehabber (us) or a veterinarian as soon as possible.  If there will be a delay in getting him to a rehabber or vet, keep him somewhere dry, quiet, warm, and protected from potential predators (including household pets.)  Make sure to keep him inside so that flies, gnats, and fire ants won't be able to get to him. Read more on emergency procedures here.

What if you accidentally hook a turtle while fishing?
First, what not to do. Please don't yank the hook back out.  The barb at the end of the hook will shred the skin and cause major damage.  And please don't kill the turtle to retrieve your hook.
If you want to remove the hook yourself, below is a step-by-step guide on how to do that.  If you can't get the hook out, or the turtle is damaged by the removal process, get him to a rehabber (us) or veterinarian as soon as possible.

*Feel free to print and share the guide below.  Information courtesy of Austins Turtle Page. 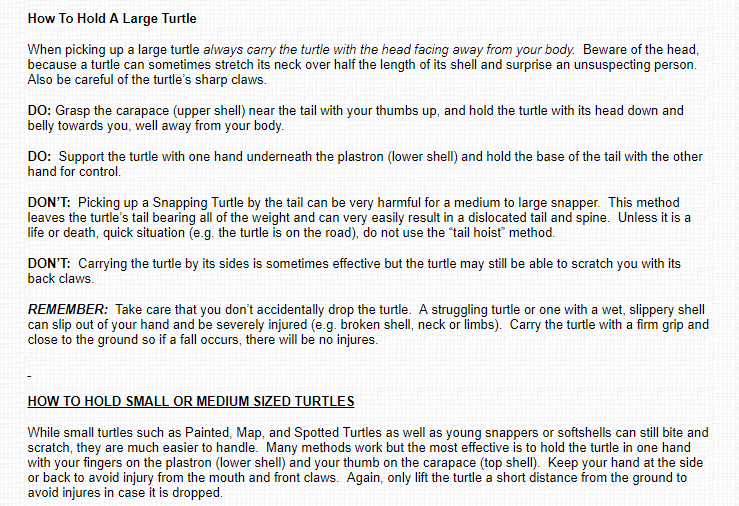 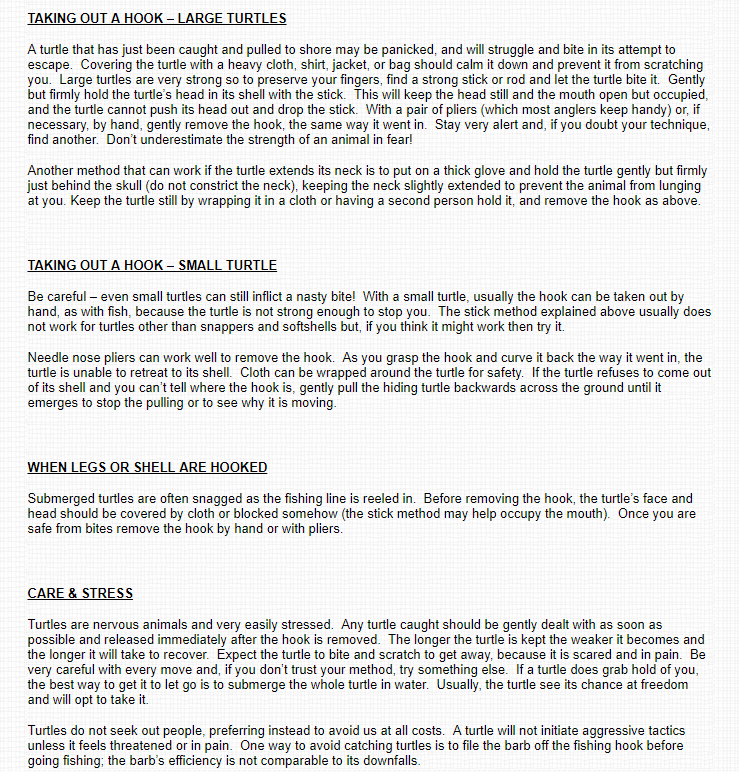